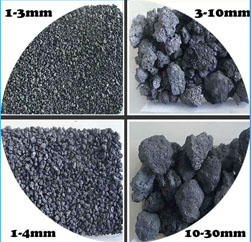 Petroleum coke (petcoke) is a carbonaceous solid that delivered from oil refinery coker units or other cracking processes. Coking processes that can be employed for producing petcoke include contact coking, fluid coking, flexicoking and delayed coking. Other coke has traditionally been delivered from coal. Coking uses heat to crack or break down large hydrocarbon molecules to produce “fuel grade” petcoke, a highly stable, solid fuel as well as other grades of petcoke. Petcoke is produced from all types of crude oil including light, sweet crude oil and heavy sour crude. Petcoke is a valued commodity around the world and there has been a global market for petcoke for decades.

There are at least four basic types of petroleum coke, namely, needle coke, honeycomb coke, sponge coke and shot coke. Different types of petroleum coke have different microstructures due to differences in operating variables and nature of feedstock. Significant differences are also to be observed in the properties of the different types of coke, particularly ash and volatile matter contents.

Needle coke, also called acicular coke, is a highly crystalline petroleum coke used in the production of electrodes for the steel and aluminium industries and is particularly valuable because the electrodes must be replaced regularly. Needle coke is produced exclusively from either FCC decant oil or coal tar pitch.

Honeycomb coke is an intermediate coke, with ellipsoidal pores that are uniformly distributed. Compared to needle coke, honeycomb coke has a lower coefficient of thermal expansion and a lower electrical conductivity.

Petroleum coke can either be fuel grade (high in sulfur and metals) or anode grade (low in sulfur and metals). The raw coke directly out of the coker is often referred to as green coke. For that matter, "green" means unprocessed. The further processing is calcining the petcoke in a rotary kiln removes residual volatile hydrocarbons from the coke. The calcined petroleum coke can be further processed in an anode baking oven in order to produce anode coke of the desired shape and physical properties. The anodes are mainly used in the aluminium and steel industry.

Petroleum coke has over 90 percent carbon and emits 5 to 10 percent more carbon dioxide (CO2) than coal on a per-unit-of-energy basis when burning. As petcoke has a higher burning combustion, petcoke emits between 30 and 80 percent more CO2 than coal per unit of weight. The difference between coal and coke in CO2 production per unit energy produced depends upon the moisture in the coal (increases the CO2 per unit energy – heating combustion) and volatile hydrocarbon in coal and coke (decrease the CO2 per unit energy).

How to Control Emissions on Petcoke Storage

Petcoke storage may occur at a variety of locations including the point of production, an intermediate logistics terminal, and the end user facility. At each of these locations, maintaining the optimum moisture content of petcoke is a key practice required to control petcoke fugitive emissions. There are three primary techniques that should be considered to maintain optimal moisture content and control potential petcoke emissions (i.e. fugitive dust) during storage:

Pile maintenance is important as a method to control potential fugitive dust. Proper maintenance of petcoke piles will help reduce the potential for fugitive dust emissions, particularly when combined with wetting or anti-dust chemical agent practices. More specifically, the following should be considered with regard to properly maintaining a petcoke pile:

An emission control technique that is commonly used at petcoke storage locations is the application of water to storage piles. The systematic application of water to petcoke helps to control fugitive dust emissions and maintain product moisture content, and can be accomplished through both portable and fixed infrastructure. Water increases the particle weight and acts as a binding agent between particles. Water spray systems may require periodic reapplication of water to overcome the hydrophobic nature of petroleum coke. Wetting systems for petcoke piles can include the following:

The following issues should be considered when using water spray systems on petcoke piles:

An engineering analysis may be required to determine the correct wetting systems for the piles. Ultimately, the most effective water application technology for an operation will be dictated by site specific conditions, but the primary considerations when selecting wetting equipment are:

In some situations, water spray systems can be combined with anti-dust chemical agents such as surfactants and humectants. Application of anti-dust chemical agents is normally achieved by combining the chemical into the water spray. The surfactant enhances the wetting by lowering the surface tension of the water thereby allowing the water droplets to penetrate deeper into the petcoke. Humectants helps slow moisture evaporation.

The use of anti-dust chemical agents may offer the following benefits: 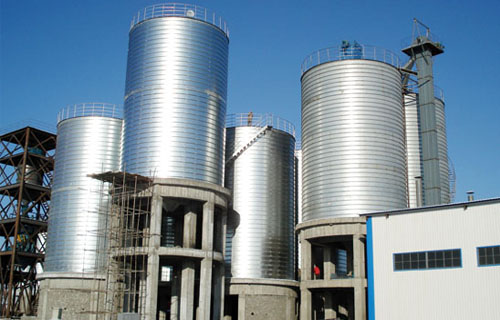 AGICO steel silo system for petcoke storage consists of a concrete slip-formed silo shell, ranging from 30m up to 70m in diameter. And the storage height varies from 30m up to 50m, depending on the soil conditions. The silo body is erected on a concrete foundation including a concrete reclaim tunnel and is covered by a structural steel roof. The roof gallery houses the in-feed conveyor. The bulk solid is transferred into the silo through the transfer chute at the end of this infeed conveyor.

The rotating double-sided bridge is centrally mounted on the central slewing piece and supported at the wall by wheels on a crane track. The bridge is a welded steel structure, and is driven by two slewing drive units. Each slewing drive consists of two frequency-controlled drives, which drive the wheels on the crane track.

The auger frame is a welded construction, suspended from the bridge and central part by steel wire ropes. The frame is guided by wheels on de silo wall. Underneath this structure two steel augers are mounted. The optimal configuration of the screw conveyor design is a consequence of the relationship between screw diameter and silo diameter. The augers convey the bulk-solids from the centre to the wall and vice versa. By the slewing of the auger frame the bulk solids are evenly spread out over the bulk solid surface. After each complete rotation, the auger frame is raised by the winches to fill the silo layer by layer until the coal reaches its maximum level or when reclaiming commences.